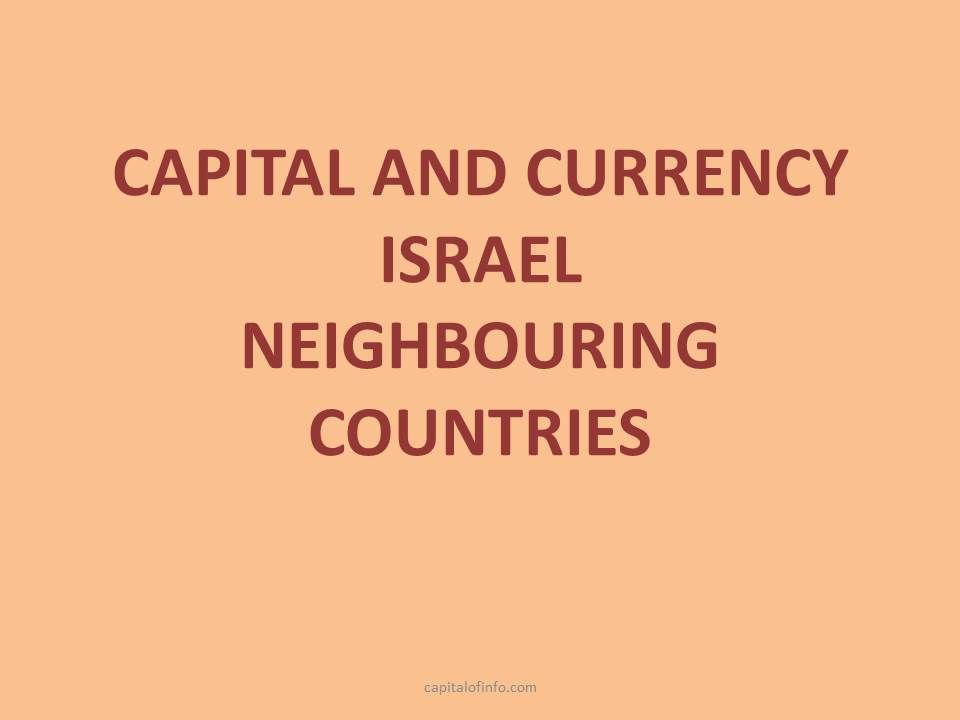 What is the Capital City of Israel

The city has great historical and religious importance for Jewish, Muslims, and Christians across the world. Jerusalem is one of the holiest city and a pilgrimage city for Christians across the world. It holds special significance in the Old Testament and New Testaments of the holy book Bible. Being a major pilgrimage site; the country attracts thousands of foreign pilgrims. Temple Mount and Western Wall are among the top tourist sites visited by visitors.

Israel is located in Western Asia on the shores of the Red Sea and the Mediterranean Sea. It shares borders with the following countries of Asia and Africa.

Israel was formed in 1948 after the entire region called Palestine achieved independence from British rule. The partition plan by the UN suggested Jewish State and Arab state which was accepted by Israel but rejected by Arabs.

Hebrew is the official language of Israel. It is the most widely spoken language in the country. The Arabic language is spoken by Arabs. Apart from Arab, many other minority languages are spoken by the immigrants. Russian, French, Amharic, and Maghrebi are major minority languages. Though English lost its status after independence, it is still spoken in the country and occupies good space in media and communication.

Hebrew is an only shining example of a successful revival of an extinct language. It is used by the Jewish community across the world in prayers. After Israel, Hebrew is widely spoken in the United States by the Jewish immigrants.  Hebrew is also known as the holy language as the original Bible was written in Hebrew.

Public Holidays and Festivals of Israel 2022

Here is a complete list of the public holidays 2022 for Israel. The holidays in Israel comprise religious, national, and bank holidays.

Below section gives detailed information on Jewish celebrations of Israel.

Major Festivals and Celebrations in Israel

These festivals are mostly celebrated by Israeli people with their friends and families. Schools, colleges, and many services are closed during these days.

Rosh Hashanah is the start of New Year as per Jewish calendar. It usually falls in September and celebration start from the eve of the preceding day. Felicitations of New Year are exchanged and people engage in festive services in synagogues.

Yom Kippur is a festival of forgiveness and repentance. It is celebrated on the 8th day after Rosh Hashanah. People fast, offer prayers, and seek forgiveness for their wrong deeds. They abstain from pleasures and services like media and entertainment remain closed on this day. It is known as the day of divine judgment or atonement.

Sukkot is also known as the pilgrimage festival and harvest festival. It is an eight-day long festival. This year, it begins on 9th October and ends on 16th October 2022. The festival is referred to in the Holy Bible and called Feast of Tabernacles. Jewish people remember their great Exodus from Egypt.

Hanukkah is eight days long festival mainly celebrated by lighting candles. Mostly, a candle is added on each night of Hanukkah making 10 candles on the final night of Hanukkah. The festival celebrates the victory of the Jews over Greek rules in 164 BCE. Hanukkah 2022 begins on 18th December 2022 and ends on 26th December 2022. It is also known as the festival of lights. Hanukkah is not a major religious festival but of great cultural significance among Jewish people worldwide.

Passover is also known as Pesach and a major Jewish festival. It falls in the spring season during March end or April beginning. As per the Hebrew calendar, it is on the 15th day of Nisan. People celebrate the freedom of Israeli from Egyptian slavery. Traditionally, Passover is celebrated for seven or eight days. Christians also observe Good Friday and Easter around the same time.

Capital of Israel was known as the City of Shalem in ancient times. The city has been destroyed and attacked multiple times in history. East Jerusalem is called Old City was once captured by Jordan and later recaptured by Israel from Jordan in 1967. West Jerusalem was captured by Israel during the 1948 war and Israel declared it as the capital city in 1950. Capitalofinfo.com provides information on capital cities of various countries including currency and official language.