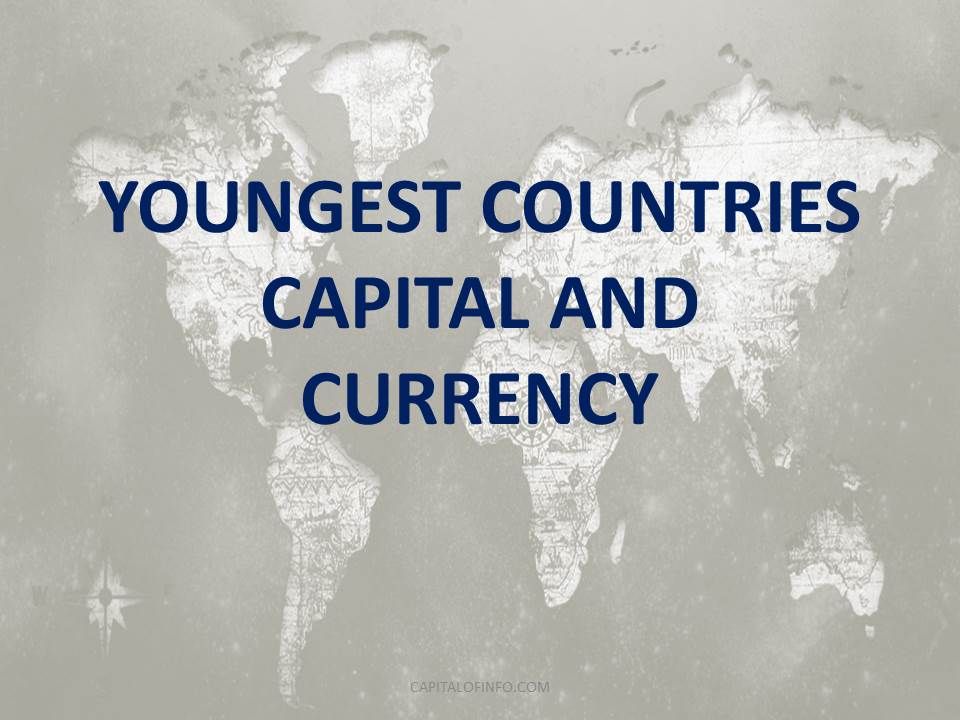 Countries that Achieved Independence Most Recently

This post lists the newest and youngest countries of the world. After World War II, most of the countries of Asia and South America started becoming independence. Colonies like India and Korea were free countries. But you will be surprised to know that some nations are formed just in the past two or three decades. Here we have listed the nations formed most recently. We are sure you would love to learn about them.

Capitalofinfo.com brings information related to capital cities, currency, and official languages. As we tell you about the youngest nations, we have also stated their capitals. It would be a great thing to update your knowledge with this list. While some countries achieved independence; some are formed with the support of the United Nations.

Difference between Holland and Netherlands

Top Youngest Countries of the World

Check out the list of the newest countries with their capital and date of becoming a nation. Also, browse our website if you want to know the capital cities of Germany, France, Portugal, Switzerland, and Italy.

The Republic of Kosovo was formed as a sovereign state separate from Serbia on 17th February 2008. However, the status of the country is still disputed. As we are writing this, 98 UN member states have recognized Kosovo as a sovereign state. It is located in Southeastern European bordered by Serbia, Montenegro, Albania, and North Macedonia.

East Timor was first colonized by Portugal and later on became Indonesian province. Hence, it was known by the name of Portuguese Timor until 1975. East Timor’s capture by Indonesia was highly violent. Dili Massacre in 1991 was the final point and movement for its independence became international.

The country was born in 2006 out of the State Union of Serbia and Montenegro. The neighbouring countries are Albania, Bosnia-Herzegovina, Croatia, and Serbia.

In 2003, Yugoslavia was transformed to Serbia and Montenegro. In 2006, Montenegro and Serbia both became fully independent.

Other languages spoken in this country are Bosnian, Serbian, Croatian.

As said above, Serbia was an independent country in 2006 along with Montenegro. Serbia and Montenegro were joint states after the breakup of Yugoslavia.

Other languages spoken in Serbia are Bulgarian, Hungarian, Bosnian, Romanian, Slovak, and Albanian. The neighbouring countries of Serbia are Hungary, Romania, Bulgaria, Bosnia-Herzegovina, Montenegro, Croatia, and North Macedonia. Due to a claim over disputed territory in Kosovo, Serbia shares border with Albania.

Palau gained independence on 1st October 1994 and one of the smallest nations. Palau is an island country in the Pacific Ocean comprising around 340 islands. It shares maritime borders with other island countries like Indonesia, Micronesia, and the Philippines.

Palau was captured by the United States from the hands of Japan during World War II. Palau comes under the COFA or Compact of Free Association agreement. As per this international agreement, Palau, Micronesia, and the Marshall Islands are freely associated states. Under this agreement, the US provide financial aid to these nations over a certain period of 15 years. Hence, Palau is also known as Freely Associated State.

Czech Republic is also known as Czechia. The country was formed out of the dissolution of Czechoslovakia on 1st January 1993. It is neighboured by Slovakia, Poland, Australia, and Germany.

The dissolution of Czechoslovakia resulted in the formation of Slovakia and the Czech Republic. Slovakia is also known as the Slovak Republic. It is bordered by Czech, Austria, Poland, Hungary, and Ukraine.

We are sure you liked the above list of the newest countries in the world. Check our website to know the capital cities, currency, and official languages of the world.

Croatia became a fully independent nation in October 1991. The country was born out of the dissolution of SFR Yugoslavia. The neighbouring countries of Croatia are Slovenia, Hungary, Serbia, Bosnia-Herzegovina, and Montenegro.

After the dissolution of Yugoslavia, Bosnia and Herzegovina became an independent country in 1992. The neighbouring countries of Bosnia-Herzegovina are Serbia, Croatia, and Montenegro.

North Macedonia is yet another successor state born out of the breakup of Yugoslavia. It gained independence in 1991. The neighbouring countries are Serbia, Kosovo, Greece, Bulgaria, and Albania.

Slovenia is a successor state formed following the dissolution of Yugoslavia in 1991. Its official name is the Republic of Slovenia. The bordering nations of Slovenia are Hungary, Austria, Italy, and Croatia.

Italian and Hungarian are other recognized languages spoken in Slovenia. We are sure you liked the information shared here about the newest countries. Keep visiting capitalofinfo.com to learn the capital cities of the world.