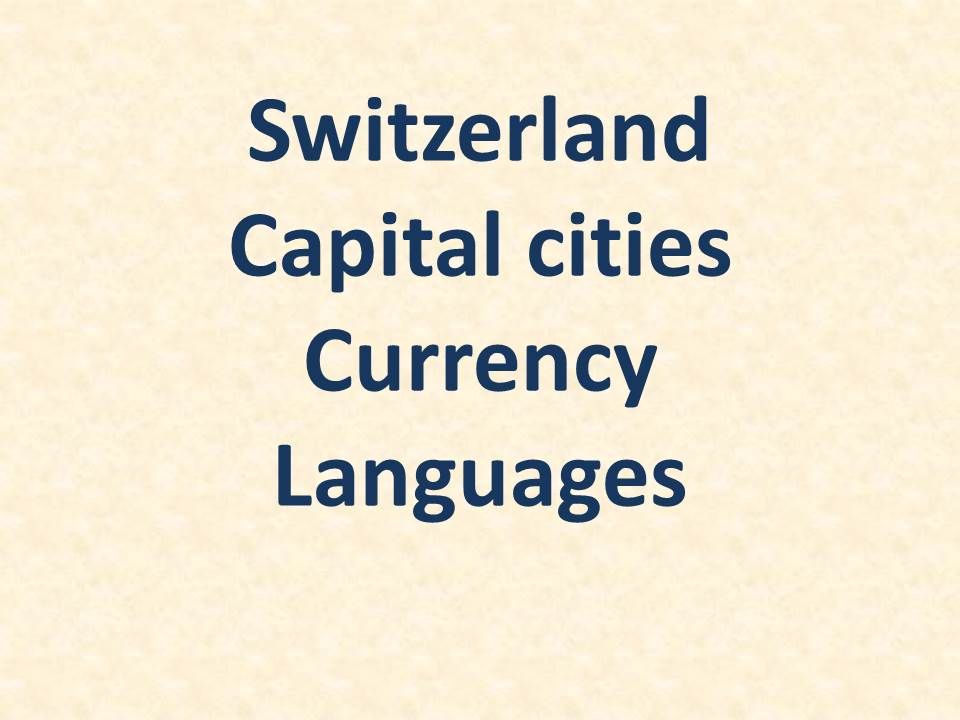 Being a seat for the federal parliaments, Bern is known as the capital of Switzerland. Switzerland is popularly known as heaven on the earth. The country is famous for sparkling Alpine peaks and ethereal lakes. Apart from the Swiss capital city; Zurich, Basel, and Geneva are also important centres in the country. The country is not having any coastal border and neighbored by Italy, France, Germany, and Austria.

Switzerland capital and currency information are stated here for informative purpose. Switzerland Bern is famous for being one of the most developed regions in the world. The country is having the highest wealth per adult in the country. The major four languages spoken in the country are French, German, Italian, and Romansh. However, the main language is Germany used by 62% of the population in the country approximately.

Find below the major information about the country including languages and currency.

The language map of the country is quite diverse and interesting. Different European languages, as well as Romansh, enjoy official status in various parts of the country.

Majority of the population in the country speak more than one language on a routine basis. The German spoken in Switzerland differs from the one spoken in Germany. The dialect greatly differs and hence it is often known as Swiss German and Bernese German. Many people also speak standard Germany, English, Portuguese, Albanian, and Spanish. Romansh is mostly spoken in the easternmost canton of the country known as Canton of Grisons.

Many terms are common in all the languages spoken in Switzerland. This makes languages of this country different than the ones spoken in Germany, Italy, and France. These typical words are strangers in other parts of Europe and collectively known as Helvetisms.

Switzerland is neighboured by other European countries. Here is a full list of these countries with capital cities.

Further, you can check the top tourist destinations of the country.

Find below a complete list of the holidays in Switzerland 2023. The list is right as of now. However, we request users consider the changes that occur at a later stage.

Must See in Switzerland – Bern

There are many attractions in the Swiss capital and other parts of the country. These are the top-rated and best-known tourist destinations in the country. Tourism in this Swiss country is largely connected to winter sports like hiking and glacier skiing.

Bern is an excellent city that offers lots of famous buildings worthy of sightseeing. Here are some of the best spots that are must-see in Bern.

All the above buildings in Bern exhibit the origination and growth of human and technology. The rose garden park offers the beauty of nature in lovely roses while the Bundeshaus is a parliamentary building with glittering renaissance architecture.

The heaven on the earth offers lovely landscapes for sightseeing. Here are the top tourist attractions of Switzerland.