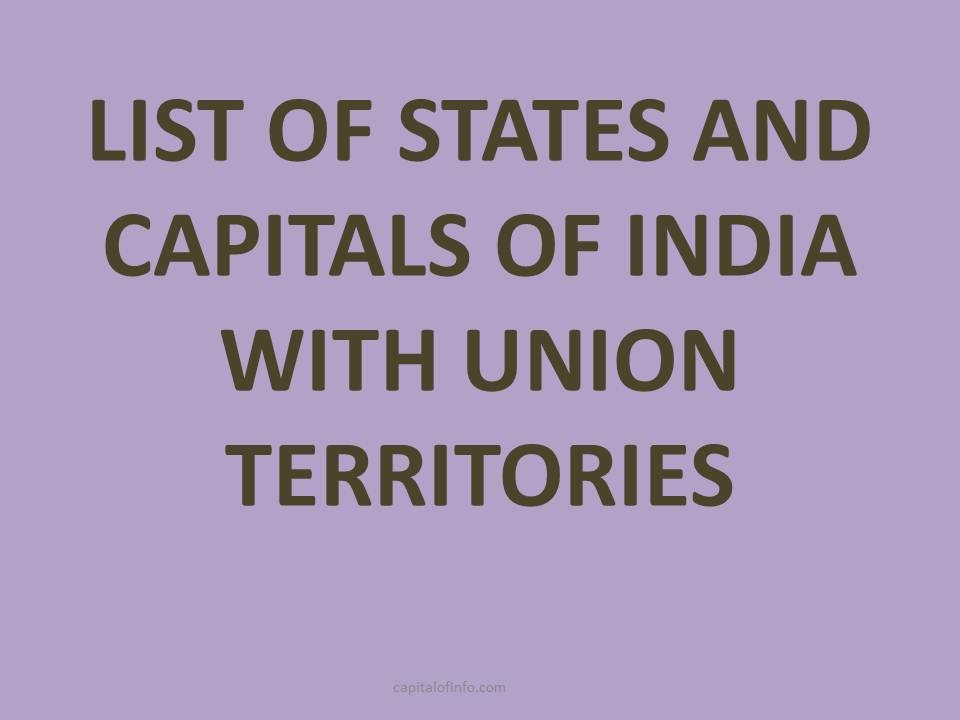 How Many States and Union Territories in India

Here we have shared a full list of states and capitals of India. As of now, there are 28 states in India and 8 union territories. Our post is written to provide information about our country to the students who are looking for states and capital. Capitalofinfo.com offers a list of capital cities of India and the world. Our India stands at the seventh position according to the area and second according to the population. The neighbouring countries of India are Nepal, Bhutan, China, Pakistan, Bangladesh, Myanmar, and Sri Lanka.

India is a rich country with diverse cultures, natural attractions, and heritage sites. India is surrounded by the Arabian Sea, Bay of Bengal, and the Indian Ocean. Andaman and Nicobar Islands and Lakshadweep are major islands of India. There are many other islands and some of them are uninhabited. Further in this post, we have provided the complete list of all the states with their capitals including union territories. If you are looking for the capital cities of Australia, Canada, and Germany, do visit our website.

Here is a full list of states and capitals of India. The list is made according to the information derived from Wikipedia.

We are sure you are happy with the above alphabetical list of states and capitals of India as it is in 2022. As the Jammu & Kashmir are now union territories; there are 28 states instead of 29 states of India 2022.

Union Territories of India and their Capitals

Countries are comprised of states, provinces, and territories. Here is a list of all the union territories of India as per the year 2022. We have also given the capital of Ladakh as many will be looking for the capital city of the newly declared union territory. On 31st October 2019, the state of Jammu Kashmir is reconstituted into two territories; Jammu & Kashmir and Ladakh.

Difference Between State and Union Territory

States are separate divisions under the constitution of India having their separate governments. States have their administration and legislations The Chief Minister is the highest administrative authority and the Governor represents the President of India in states.

A union territory is a region that is directly under the Central Government of India. It does not have its legislation and administration. Andaman and Nicobar Islands, Delhi, Daman and Diu are major union territories of India

Capitalofinfo is publishing list of capital cities of various states, countries, and territories. Keep following us to know the capitals and states of India. Also, check what the capital city of Australia and Canada is. We are an independent portal providing information and not related to any authority in India and abroad. The website is created purely for the informative purpose to enhance the general knowledge of people and especially students. Do consider to share our post related to states and capitals of India with your friends.